Kids are so full of surprises! Just weeks after Christmas and the usual delude of new toys and games and what was my daughter wanting to play with? A teddy bear she has had for years! Now reincarnated with a new name and involved in all sorts of fresh imaginary play; I knew what was coming next…

Imagine my confusion! Who or what is Ellie? Followed by the panic of realising I not only have no idea where the once-buried-under-the-bed-in-a-box toy appeared from but how did she even remember it had clothes? And she seriously expects me to just pull out this last seen in 2013 teddies coat and boots? What? Goodness, this mamma can barely remember the day of the week let alone anything else! We dug in the we-have-no-idea-where-else-to-put-this-stuff box to no avail and alas I began to wonder if these ‘suddenly in demand’ items she can not live without now could have ‘accidentally’ jumped into my car boot in the pre-Christmas clear out. Oh what an awful parent I am! I shall pre-book my daughter to that counsellor she is sure to need when older!

And sometimes, for our own sanity, we make a promise we know our bank account will live to regret!

Ok, this weekend we shall take Elizabeth, Ellie, ..whoever, to the bear shop and buy her an outfit. Ok?

Well until today when that eager eyed baby woke and ran into my bed to announce today was the day her bear was getting new clothes! That’s it, NOTHING is ever getting thrown out again, you hear me!

So we excitedly (well reluctantly on my part!) got prepared to go. And this is when it gets complicated! As well as my way too attentive daughter I also have the honour of being mum to my son who has complex needs. How in the name of whoever am I going to get this boy of mine into build-a-bear? It’s not like you can buy a bear and get a free burger now? And the last time I checked they had no lift or hand dryer? So that’ll be a ‘no chance mum’ as per!

Flip! Could Elizabeth, Emily, sorry Ellie not become a naturist for a while until you find some other old toy? That look…well if you are a parent you know what I am referring to…it said it all!

So let’s just get this over with!

You are kidding me? Really?

My son, aged seven, who has never in his life touched a teddy, who has yet to speak, who has no idea about imaginative play…is standing over a basket of teddy ‘skins’ and has ‘chosen’ one he wants! STOP!

He is in the shop. He is not screaming. He has not wrecked the entire place.

Now THAT was worth coming!

Now how do I explain this ‘teddy’ needs stuffed by a loud, spinning machine full of white ‘stuff’? He doesn’t know what a teddy is? Or maybe he does?

Well he waited, and he ‘chose’ an outfit, unsurprisingly one that closely resembled his own beloved school uniform (he doesn’t care it was a skirt) and a red bag to match. Meanwhile I dreaded to imagine what his sister had seen! Have you seen the prices of these clothes? I pay less for my own clothes and I can assure you they are a whole lot bigger!

She settled on…the exact same uniform, a pair of pyjamas…and the added ‘accessory’ of…a wheelchair! She announced in front of the entire shop that her bear just wanted to be like her brother. And how do you argue with that?

Ok, mr build a bear, your prices are crazy, your appeal far too great, your choice better than the average high street shop for ‘real’ people, and I never want to visit for a good while until my bank account recovers…

But I have to admit, you gave me a moment of beauty today. I even hasten to say a miracle. The boy who has no teddies now has one. And he hasn’t let it go since! And you ‘normalised’ using a wheelchair for a child who sometimes struggles at how different her brother is.

So cheers! I owe you one!

P.s, a coffee shop to give me a moment to recover may not be a bad thing! I’ll leave that with you 🙂 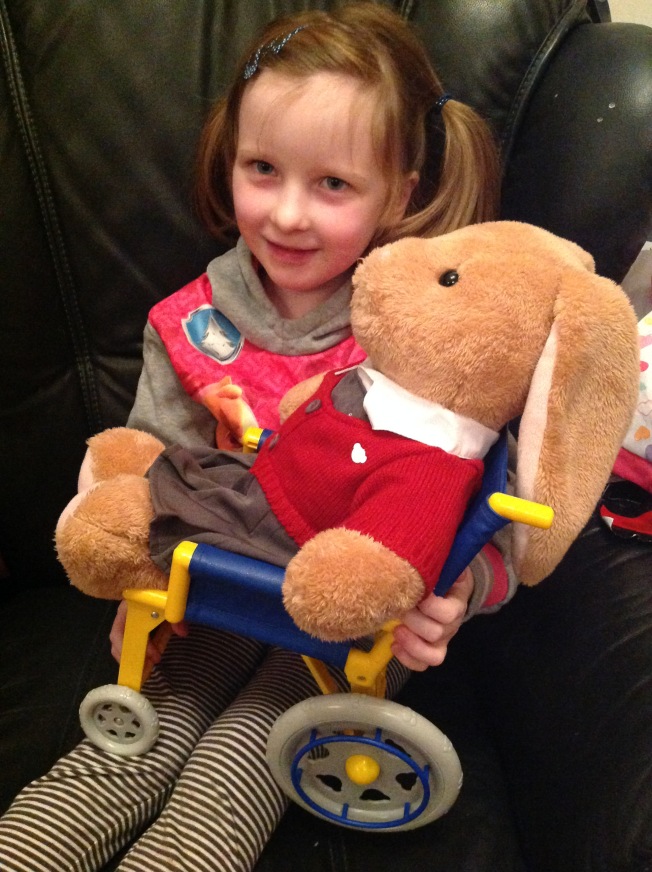