Isaac loves his iPad. It is with him from the moment he wakes until the second he goes to sleep. He has a few games he likes and he really enjoys looking through the photos but his all time love is YouTube.

He is pretty typical of many 8 year old boys in that sense. However there is something very different about Isaac: he has no spoken language at all. Isaac has severe autism as well as other complex medical issues and he has poor eye sight. He can not read or write and certainly can not type into a you tube search bar. He fumbles his way through you tube by clicking on random videos and spends most of his day flapping in delight at lift doors opening and closing over and over again.

When Isaac does listen to songs they tend to be very random or theme tunes of favourite programmes aimed at very young children like ”Peppa Pig’ or ‘Wooly and Tig’. He rarely allows anyone else to touch his iPad so he has to go on ‘rabbit trails’ through lift videos or episodes of Wooly and Tig to find anything different. Due to the nature of the video playing app he tends to be faced with a fairly limited repertoire but this has suited him immensely due to his need and love for repetition.

I am not afraid to admit I often struggle to parent my son. He gets frustrated (I absolutely understand that) and that can lead to hours of screaming or throwing himself down the stairs or hitting and pinching people. He has severe phobias of things I can not control like open doors or other children (including his sister) eating and drinking. His life has to be the same all the time which makes living with him quite restrictive. He is not toilet trained nor can he care for any of his own needs. Some days I get very low and I question ‘why us?’ My faith has been taken to levels of testing I never knew existed before. 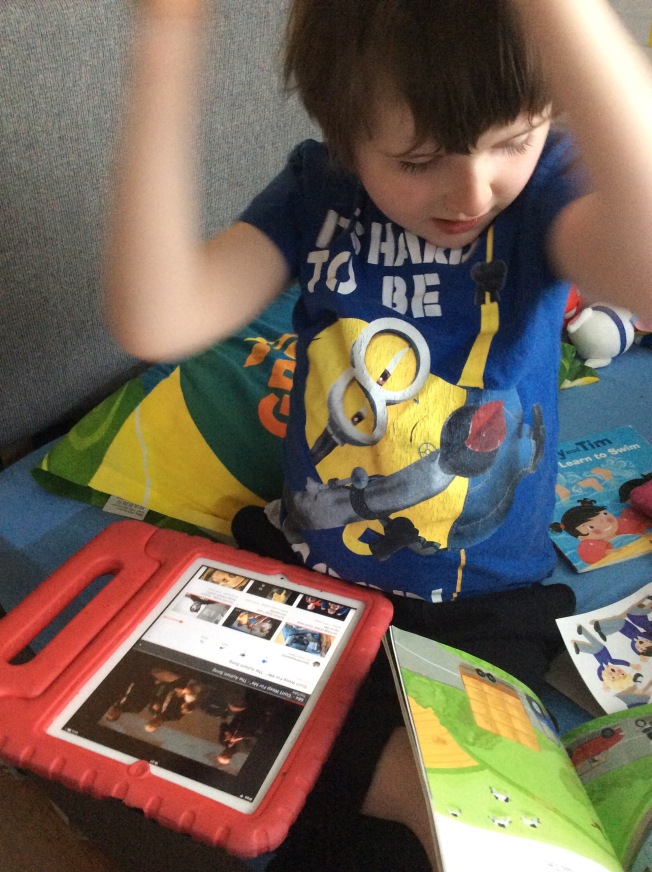 Then one night last week I stopped what I was doing and just sat beside my son. I longed to hold him but I knew he would attack me. My love for him was overwhelming yet I was unsure if he even knew who I was. I sat beside him on his bed and I could feel the tears building at the back of my eyes. I have not been able to take him to church for weeks now because of his outbursts and his inability to cope with the slightest change. Had God forgotten about my child? Did my son have any idea of the world around him or how much he was loved? I was weeping for my child. My heart was broken both for myself and my son.
In that moment I heard words that seemed to come from God himself. A male voice I had never heard before. The words caught my heart before my brain even fully processed them..

What? My son was looking right at me smiling. He knew who I was and not only did he love me but he had something to share with me. He moved closer to me as his finger pulled the scroller on the you tube bar back to the start of where he wanted it to be…

Somehow, I believe from God himself, my non verbal severely autistic son with limited eyesight and no ability to read or write, had found a song on you tube that was saying everything HE wanted me to know…

“Don’t weep for me, God made me this way. He’s chosen not to let me speak, but I hear every word you say…

Because the pieces of many colours symbolises what I am, it represents the hope of a cure that lies in God’s own hands”

He pulled that bar back to the exact spot again and again as those words washed right over us both.
I was weeping for a child I thought I had lost but here that same child was showing me more than his own words ever could in a way so powerful, so emotional and so spiritual it was like God himself was in that room.

I can not explain how he found that video. I can not explain how he understood those words and related them to himself. I have no logical explanation to the timing of me arriving in his room and him finding it or the fact he would scroll right back to the start of that chorus time and time again.
We sat there together for what felt like hours. The words of that song healing places in my heart I had not even realised were broken.

Isaac can not speak to me but God can use any means he wants to give him a voice. That day he used you tube and this song.
Have a listen to what my son wants everyone to know: