Seven year ago I started my journey of parenthood. It has been the most exhilarating, exhausting and enlightening journey ever. Over those years many have journeyed along with me but every year more of those people take a slightly different route. Every now and again I stop and look around, and while there are still many of you cheering me on, I notice as my children grow that there are less like me.

When my child was not speaking at aged one there were hundreds of others like me. That first birthday came and so many of us were yet to hear ‘mamma’ or ‘daddy’ and so we journeyed together for another year.

When the second birthday came along a lot of those children were now talking. It was beautiful. But some of us were still waiting. So we travelled on another year.

When the third birthday came I looked around to see some were crying happy tears as those precious words were beginning to come slowly. There were still others with me walking the path together of ‘is this autism’ or ‘should I be worried by now’ and we consoled ourselves together in our group. I wasn’t alone.

As we approached four I could hear some cheering us on. “This is the year” they would say, “Nursery will bring him on”, “he will soon get there!”. Hope carried me on as one by one more of my companions on my journey started to see their little ones develop and grow and finally speak.

There were less of us by now. The odds were not in our favour as much. Our children were starting school and still not speaking. This started to get serious and worrying and yet we continued to journey on supporting each other. As our special babies began school something changed. A few more, slowly but steadily, began to speak and the group became even less. As beautiful as these moments were it becomes more and more scary when there is less like you.

Still a few more trailed off by the time my child reached six. Therapists, teachers and parents rejoicing at little voices emerging years after they should. Miracles still happening.

And there we were, still waiting.

He is seven and a half now. And still not speaking. My true companions are few now and reality starts to settle in. Are we all here now for life? Is there still hope for us? Is there a time to say that the therapies are not working for our child? Our small group sub divides between those who have children using pictures to communicate and those who use sign language. Some are even managing both! We start to celebrate communication instead of language.

Then there is my son: Seven, no language, not using picture communication and only mastering three basic signs.

It is lonely here in my world. It really is hard to stay positive. It gets harder to find stories of children like mine. Sometimes it feels like we were forgotten. I admit it is heartbreaking when there is less like you..

But the longer we wait…the more of a miracle it becomes.

So we keep on waiting..even if we are left waiting alone.

And so another December has begun and Christmas is almost upon us once again. There is something so special about this time of year with the fairy lights, and Christmas carols, children’s nativity plays and the joy of giving. The awe of little children’s faces as they open up a gift that was so wanted, wether it be from Santa or family. That is what parents long for and why families will go to extreme lengths to see a smile on a child’s face.

But what if you have a child who can’t ask for anything? What if you have no idea what they would like because they struggle so much to communicate and play with so little?

Six years ago I gave birth to a beautiful baby boy. An I am still waiting to hear him speak.

I want him to argue with me. Shout at me ‘no’ and tell me he is angry.
Because that would be words. And it would be beautiful to hear.

I want to hear him singing little children’s Christmas songs, making up words when he can’t remember them and laughing at the silly versions I sing back to him.
Because that would mean he understands. And that would be beautiful.

I want to be able to take him to a Santa’s grotto and hear him list of a spiel of toys and games he would like even if it would break the bank to buy him them.
Because that would mean he knows toys are for playing with and has the ability to choose one over another. And that would be beautiful.

I want him to have a part in the school nativity and practice lines with him until I could say them in my sleep.
Because that would mean he was included like all the other children and he would be just like them. That would be beautiful.

I want to take him to a toy shop and hear over and over again ‘mummy can I have, mummy look at this, mummy my friend has this and it’s brilliant, oh wow I never knew you could get that’ and so on.
Because while other parents find that annoying and frustrating it would be music to my ears. Words from my child would be beautiful.

To have him say ‘can I have this dvd on mummy’ or ‘I want lifts’ when he hands me the iPad on you tube would be wonderful.

He once said ‘mummy’. I was so excited I put a status on Facebook and wrote an entire blog about it. I had to wait over fifty days before he said it again. That was over a year ago and he has hasn’t said it since. I thought I heard him say ‘on’ two months ago when I did a huge amount of intense interaction with him. If it was a word we have yet to hear anything like it again.

They tell me we need augmentative communication now. In other words we need to lessen his frustration by using pictures, technology and sign language. These are all good. But I still just want to hear my baby boy’s voice.

I hear him cry. I hear him scream. I hear him whine and make baby noises. I love his giggle and I treasure his ‘ahhh’s and ooooh’s’ that does when he is happy.

But all I want for Christmas is to hear his voice.

If only every christmas dream came true. 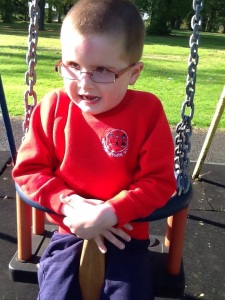