The nativity was done, the presents bought and the food all ready. When your twins are six they ought to be excited about Christmas Day. One of mine was. The other was totally oblivious to it all.

But we bought him gifts regardless.

The day started badly. Pretty badly to be honest. Isaac refused to come downstairs even though we had changed and dressed him (in his school t-shirt and jumper as he still refuses to wear anything else). So while Naomi was embracing the magic of it all and loving the fact she had received the very toy she wanted, there was a noticeable absence in the room. I should have suspected something. But I didn’t want to miss that magic of seeing my daughters face when she opened her gifts. Plus she wanted me there.

It was all too late. Isaac was busy upstairs, in my bed by now, having a party of his own. His ‘gift’ was of his own making and the smell was overpowering. The bedding, his clothes, his body from head to toe, and anything else nearby needed urgent attention. So while I attended to a screaming, fighting child, a filthy room, and smelly clothes, I was missing out on my daughter’s special moments. Moments I will never get back. And her happiness at getting presents was tarred by the fact her mum was not in the room to share it with her.

Stress, lack of attention, sensory seeking? Who knows really. He can’t say and I can’t mind read. It wasn’t a good start though.

He came down and saw her new toys and tried to attack her. Despite him having plenty of his own he showed no interest in any of it and started screaming again. Naomi wanted to defend her toys but having sustained quite an injury from her twin less than a fortnight ago (which still has yet to fully heal) she was scared. So she started crying.

‘Mummy, why won’t he leave my things alone?’

Jealously, lack of understanding, curiosity? Who knows. He can’t say and I can’t mind read. How do you support siblings when a child can be so unpredictable and violent?

Later on we went out to grans for dinner. He ate a bit then climbed on a bed in a room, as he always does. He was extreme sensory seeking (use your imagination here) and was not going to be stopped for anything. Finally he returned to us covered in sweat and pulled me to the kitchen. By process of illumination we found he wanted a pineapple. As he pulled the leaves off and played with them, despite having lovely new toys there to play with, his twin sister once again was curious.

Lack of imagination, developmental delay, sensory issues? Who knows. I can’t always answer as eloquently as I should.

We returned home and I prepared a light tea for everyone. Lots of snack foods and treats. But no meal is complete for Isaac without mashed potato and gravy. And I had not made any of that. And because it was laid out as a buffet his plate was sitting empty (so to him he wasn’t getting any. Why did I not think about that?). He went crazy! Cue screaming, crying, food flying, crockery smashing and a huge amount of stress. So maybe I should have made mash and gravy but he had already had it twice that day and it was all food he usually loves. Surely we can have one mealtime without mash and gravy? I was exhausted, angry, stressed and frustrated. I walked away. 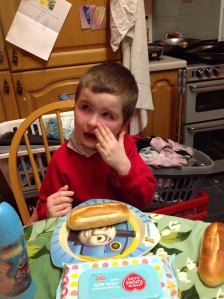 The son screamed and lashed out more. The daughter cried. The husband’s stress levels were at boiling point.

I returned to comfort my daughter. Through tears she snuffled,

‘Why does my brother have to ruin everything?’

I met that question with silence.

We tried. We failed. I’ve came to the conclusion tonight that Christmas may be best done in private with my daughter in her room. It isn’t fair on her, on us, or on her brother. I have 365 days to work out how to make it better for her.

It starts with the tree coming down tomorrow.