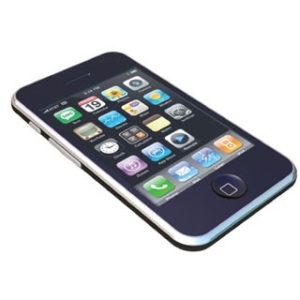 It seems the shop assistant thinks so. When I payed for the item and told him it was for a six year old’s birthday he gave me that ‘look’. You know that look that shows he thinks you are clearly deluded and should he be calling the doctor on you? I know that look too well.

So I am sitting here asking myself what is wrong with a smart phone for my six year old?

I KNOW he will love it.

He will be able to work it way better than some adults I know.

He will be able to teach others to work it.

It will amuse him for hours and I already know it will be the highlight of his birthday.

It has an incredible ability to help him learn.

It is portable so can be used in the car to keep him occupied on long journeys.

Provided we limit the amount of time he is on it everyday it should not cost us too much money.

He will be the envy of his school friends.

But most of all it will probably give me some quiet time where he will sit alone and play.

I will be judged. I know that. I am used to that. And the same people will also judge the fact he is also getting a CD player too. He broke his other one dropping it down the stairs so like all good parents we are just replacing it and saying nothing. No sitting on the naughty step. No time out. We just replace it because he liked it. He was so upset about it after all and no-one likes to see their child upset. I never even had him ask for a new one. He just knows he will get a new one soon.

So you probably think he is spoiled. And that I have more money than sense. Some people may even be calling me unkind things by now.

Here is the CD player in question: 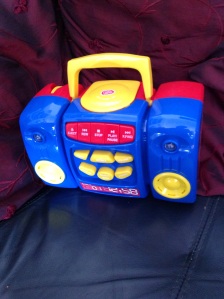 It is designed to be played with by young toddlers. My almost six year old is so behind developmentally due to neurofibromatosis type 1, autism and global developmental delay that he is only just starting to play with toys like this.

And here is the smart phone the shop assistant was so shocked I was buying for a child his age:

It lights up, it plays music and it gives instant feedback. Just his sort of toy really.

It’s easy to judge when you don’t have all the facts.

Am I crazy buying my six year old a smart phone for his birthday? When you think he can’t speak, is still in nappies, can’t dress himself and still eats with his fingers…baby toys and toddler toys are exactly what he needs.

In fact here he is on his first birthday having no idea how to play with a toy he received: 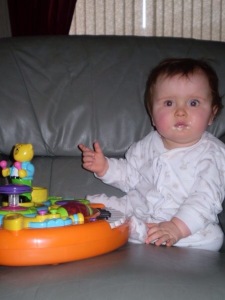 5 years later he would just love this toy again. I wonder if there are any keyboards with dancing drumming bears on sale…

The crazy thing was I threw out all his baby toys and now I am buying them again five years later. At least now he might play with them.

Have you any idea how excited I would be if my six year old actually asked for and was able to use a REAL smart phone?

Call me crazy but if that happened I would be right back at that store buying him one tomorrow!