The teachers had a training day and here I was with an entire day with just one of my children. I thought it would be lovely to take him to one of his favourite places to go to…the city centre! This little six year old boy just beams with delight at the very mention of going on a train. How could I resist that smile?

He had it all planned. He has me trained.This is the routine he always does and nothing changes in his wonderful world of classic autism. We go by train to one particular station, we get off and enjoy the escalators and then turn and go into an indoor shopping centre. From there we press every button for every lift, flapping wildly in delight at the thought the doors will open any minute and we visit every floor that every lift has before finally ending up at the food court where he has me knowing to purchase the same meal he always has and sits in the same seating area he always likes. He then spends an inordinate amount of time laughing and clapping at the hand dryers in the bathrooms before running with gusto to the most expensive, prestigious toy shop in town. 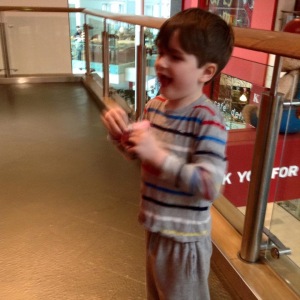 He knows exactly what he is looking for and I know exactly where he is headed. He bypasses without even a second glance the high prices teddy bears and Lego sets and remote control cars. He hurries past the jigsaws and dolls and the toy animals. He has one place in mind and one place only…he is heading for the lift!

I never have worked out quite what is so wonderful about this particular lift. After watching it for hours at a time you really would think I would have figured this out but I just can’t. But this lift gives me him so much pleasure, more than any toy in the entire shops ever could. He watches the numbers, gets excited at the doors opening and finds great amusement in just looking at it. The total highlight of his trip. In fact until today I wasn’t even sure if he even realised he was in a toy shop. 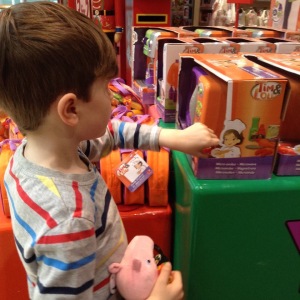 ‘mummy can I have…’. It is just days until this boy’s seventh birthday and yet he has never once said those words. He has never asked for anything in a shop or even really played with toys. He has no concept of Lego or toy cars and has no ability to read a book. He can not kick a ball and has no understanding what dress up pretend play is. For almost seven years he has been caught up entirely in his own world of sensory play preferring a bowl of water, pressing a hand dryer to turn it on or endlessly watching lifts either in real life or on you tube.

So can you imagine my shock, my amazement, and my emotions when all of a sudden my almost seven year old turned away from the lift for the very first time and looked over at a display of toys! As if the looking wasn’t enough he casually wandered over and decided to ‘play’ with the toys!

Did you hear me…HE PLAYED WITH A TOY! This is epic! This is breakthrough! He suddenly woke to the fact there was a world besides lifts! And he touched a toy in a toy shop!

I scooped him up and kissed him and gave him a high five! I stood there and watched with tears in my eyes! Then without looking so much at a single price tag I grabbed every single toy he had touched and took my son and his array of newly found interests to the cash register!

On the train home something just as amazing happened. It was like all his disabilities left my baby for a few hours and disappeared. It was beautiful. He put his hand inside the bag (he remembered those toys were in the bag!) and he handed me a bag of toy plastic food to open!!
I did not care if that whole carriage got covered in plastic bananas that bag was getting opened! He requested! HE WANTED TO PLAY.

Moments like this don’t come to me often. My son has no speech and he has never played with toys. So yes I spent money on plastic toys that were over priced. But you can’t put a price on the miracle I had this week. The miracle that is the simple fact:

HE PLAYED WITH A TOY! 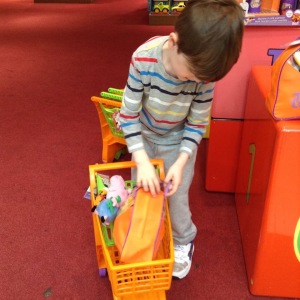