Being positive is not being in denial. Posting highlights of your day on social media is not being fake. Trying to find hope in hopelessness is not wrong.

And recently I have had to give myself a good shake.

Living with the daily challenges of two children who struggle can really get me down. Some days, more than I would like to publicly admit, I cry. I worry about the future. I struggle through everyday, often silently. And I feel alone.

But then I realised something important. I came to realise it was actually all about me!

I could look at things negative. Or I could try to see a positive.

For example I could have wallowed in upset at the thought my daughter was so anxious she never made it to her first ever school trip. I could have become angry that she seemed to be excluding herself due to fear. But instead I chose to take her out for the day instead and shared a picture of her smiling face at a science centre rather than dwelling on her inability to join her peers at the zoo. School trip failing verses mummy and daughter quality time? Which would you have thought about more? 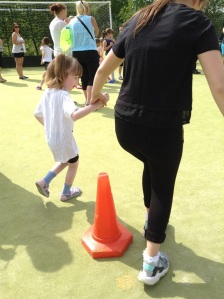 Same with sports day. I could shed many a tear over the fact my daughter was unable to join in many of the activities due to her difficulties. I could share pictures of an older girl having to take her hand and support her for even the simplest of races. Or I could take pride in the fact that on the tenth go at running around the cones my six-year-old finally had the confidence to say ‘can I try that myself?’. Those nine turns at needing support could have broken me but that final time doing it independently will make up for that every single time.

And then there was her class assembly. I was hurt and devastated when my daughter came home to say she was the only child in the class who did not have a speaking part. Her teacher had asked her and she had told them she felt she could not do it. Though I admired her honestly I have to admit I also felt so sad. For her, and for me. But can I tell you something? There was not a dry eye in the house on the day of her assembly when she took centre stage and held the entire show together with the most crucial part in the play despite not saying a single word! In the words of my six-year-old, ‘We can’t all have speaking parts. Someone has to do the acting!’ There is so much wisdom in that.

I could think about the sadness of taking her to yet another appointment.Or I could look at her smile as she played innocently in the waiting room and her sheer delight at being given insoles to help turn her feet. I think as adults we too often set our minds on that appointment rather than the child-like look at it all. 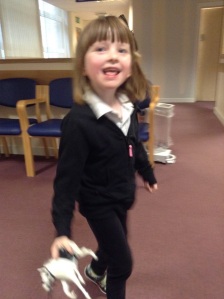 I could be angry at the fact I never get to sit in church with everyone else due to my children’s needs. Or I could take pride in the fact my children will sit outside the hall in their own little bubbles allowing me to at least be in the building. This is progress.

I could be embarrassed that I took my children to visit a friend and my son preferred to feel her garden bush than to be social. Or I could snap a picture of his happy face and be grateful my friend accepts us for who we are. And is happy for us to come back anytime.

I could shed tears at the fact my daughter recently went to a party and spent two hours sitting at the side next to me on her own. Or I could be delighted she was invited in the first place and see this as progress that she stayed in the room and enjoyed watching.

I could become frustrated at the fact everywhere we go my son is fixated with the elevators. Or I could ride with him, film him and discover on play back that he actually said the word ‘again’! Had we not been at that lift I would have missed that word! He hasn’t said it since but I have a video as proof and in time I may one day hear it once more!

And finally I could despair at the fact that for almost two years now my son has refused to wear anything other than his beloved school jumper. I mean literally every day I only get to see him in red. It started off funny but then in time I somehow gave up hope. Then, just today, he let me put a t-shirt on him and he kept it on happily all day long! And after all those tears, hopelessness and feelings of despair, I found a reason to smile again.

My children have some real struggles. I will never deny that. And everyday is a challenge. But sometimes it isn’t about them. It is about attitude: My attitude. Sometimes it is how I see things that makes a real difference to everyone else.

And now I realise that: it is all about me!