Another afternoon spent at hospital with my 5-year-old. Another trip to the eye clinic. We are on first name terms with the lady at the desk now. She doesn’t even look at the name on the appointment card as we hand it to her. She ticks my son’s name off on the list without even giving it a second though. He’s become a ‘regular’ now.

We are well versed in the hospital and clinic drill. We know when parking is going to be an issue and drive straight past the visitor car park and right into the overflow one without the previous six circles around looking for a space we used to do. We have long stopped looking at the signposts directing people to wards, clinics and hand washes. So this time we think we can risk taking the 5-year-old in without his mobility buggy. He knows the drill now. And despite hospitals apparently being one of the most disabled friendly places around, believe it or not, the chairs in the clinic are all nailed to the floor in rigid rows with no space for wheelchairs or buggies of any sort! My son can walk, physically anyway, and he is able to sit on a seat. So it has to be easier if we walk him in.

As he flaps and vocalised towards the front door I suddenly realised we had our first problem: automatic doors! Isaac loves them and is never content to just open them once…or twice…or forty times. He could happily be entertained by them all day and all night. The clinic is on the ground level so there is no enticing him along using a lift as an incentive. Not that he would get in the lift anyway. No, he would just want to watch the doors open and close all day there too.

I ended up carrying him. He is two-thirds of my height now and almost a third of my body weight. And if he does not want to go somewhere…well he won’t make carrying easy! What was I thinking leaving that buggy in the car? We arrived at the clinic exhausted before we even started.

I should have guessed it was going to be one of ‘those’ appointments. You know, the ones you think seem never-ending. The ones where the clock on the wall forgets to move and everyone else leaves when you seem stuck to the seat. Yes, those ones. Isaac sat hammering on the sponge seat back laughing at the noise. At least he seemed happy enough. He had to be carried into the first room. They tried and failed to get his attention. Until they put those dreaded drops in that is. Non verbal does not mean compliant! We had a choice of waiting in a boring waiting room for half an hour with a five-year old with complex needs who now had stinging eyes and blurred vision or we could leave the clinic and return in 30 minutes. Moving the car was not an option or it would take longer than the 30 minutes to find another parking space. Isaac had his own plans. He ran straight back to those automatic doors again!

Watching him flapping, clapping and spinning at those doors and gradually getting more and more confused as he could no longer make out the exact point of them opening and closing due to his vision slowly failing, made me suddenly realise that I was no longer just a parent to this boy. I had long passed that point. I was now his mummy and his full-time carer at the same time. He was my son, yes, but he was also in need of much more care than any ordinary child his age. Though his eyes were struggling, mine could see clearly. This was a child with needs so severe he will need life long care. I was so relaxed in this hospital setting from so many visits that it seemed like home.

Are we parents or are we carers? Or can we be both?

We have two children registered disabled. My diary is full of appointments for hospitals, clinics, home visits, and meetings. I spend my week carrying out speech therapy, play therapy, writing social stories, making visuals and making sure we have mashed potato in. Both my children have teams of professionals involved in their care and support. I am still changing nappies on 5 year olds. 20 minutes ago I just had to carry my child kicking and screaming down a hospital corridor because he refused to leave the automatic doors.

I guess we should check out the carers table then.

Society may not see me as anything more than a mummy. Until recently I would have seen myself as more of a mum than a carer too. I look after my children because I love them, like all mums do.

Isaac was given glasses this week. Lots of five-year olds have glasses. But for me this was the final thing that made me realise I have definitely moved from just being mum to my children to also being their carers.

It was amazing how many people checked out that carers table. Today I was one of them.

A trip to the eye clinic for my son has helped him see clearer. But it also helped me see clearer too. 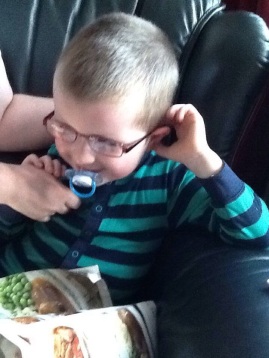